Home / The Urban Edit / Know / The Truth About Beijing’s Pollution

We all know there’s been a lot of fuss about Beijing’s pollution recently, but what’s the truth? Should you cancel your trip? Bespoke Beijing puts some facts out there to set the record straight. Now it’s going to get a bit scientific in places, so sit up straight and pay attention.

Does Beijing have the world’s worst air pollution?

Actually no. Beijing isn’t even near the top ten! Several cities in Iran, India, Mongolia and Africa are all rated as worse by the World Health Organisation.

But pollution still reaches levels that are considered to be ‘off the charts’ in Beijing doesn’t it?

Sadly yes! On Saturday 12th January, a little contraption in the American Embassy in downtown Beijing recorded an Air Quality Index (AQI) reading of 755. That index is defined by the American Environmental Protection Agency and lists readings from 0-500, so in that sense, a reading of 755 is considered ‘beyond index’. To put this in context, on any given day the reading in London or New York would be between around 10 and 40.

So how often is it that polluted in Beijing?

A reading of that magnitude was extremely unusual – indeed it’s the first and only time it has been that high since records began. To give you an idea, usually Team Bespoke starts to grumble if the AQI shows a reading of between 250 and 350, but most days we live with air that hovers just above or below 100.

Unfortunately the exact number of ‘blue sky days’ (those that register below 100 on the AQI) is difficult to measure because statistics released by the Chinese government are not trustworthy.

In our experience, polluted days occur more frequently in summer when dry, still weather conditions increase the chance of non-blue sky days. Anecdotally we enjoy the freshest, clearest days during winter, but the most low-risk time to visit is during Spring and Fall, when it is cooler and a little spring rain or end-of-summer breeze keep the air moving.

Put simply, it’s a combination of cars, factories and coal burning. “But all cities have cars and factories!” you say. Well yes, but not on this scale. As you’re probably already aware, Beijing is a BIG city in a developing country, and the social, political and industrial consequences of that are huge.

To give you an idea, until the end of 2011 there were 2,200 new cars appearing on Beijing’s road every day. What can we say – Beijing’s people are getting wealthier and everybody’s just trying to keep up with the Joneses.

What’s more, during particularly cold winters (this one saw temperatures plummet to -15 degrees centigrade) a large number of Beijing’s 20 million residents burn more coal than usual. The factories on the outskirts of Beijing also add to the problem, as does the city’s unique location on a desert plain flanked by mountains. After several days without wind, the pollution doesn’t disperse and starts to build.

How can you tell if the pollution is bad on any given day?

You can see it. It looks like fog. Until recently, most locals indeed thought that it was fog, as this was how it was explained away by the powers that be. In the last year, however, Beijingers have become all too aware of the problem, and are pushing for more to be done – despite often unknowingly contributing to the problem themselves.

To check the exact AQI index reading on any given day, go to the monitor on this webpage, which shows the data recorded and updated hourly by the US Embassy in Beijing. 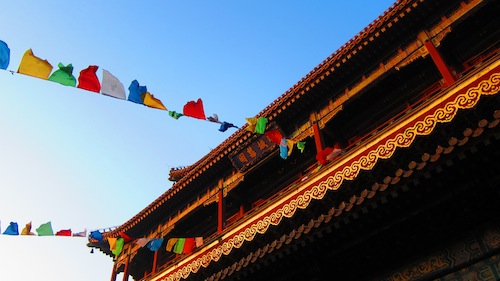 So what are the risks of being in a city when the pollution is classed as ‘hazardous’ (i.e. the AQI reading is over 300)?

Now this is the part where we want to introduce a bit of a reality check – slap you in the face with a wet kipper so to speak – because it’s the part that few people truly understand and that the media often exaggerates. Though of course we’re not making light of it either.

So here’s what you need to know: the main concern with regards to health and pollution is the level of PM2.5 particles in the air. These particles are considered to be the most dangerous to our health because they are extremely small and can stick more easily to the inside of your lungs, ultimately increasing your risk of developing a respiratory disease, heart failure and, in extreme cases, lung cancer.

Unfortunately it’s this part that is often taken out of context and misinterpreted, causing more alarm than is strictly necessary, especially among those who are only expecting to spend a week or so in China. So here’s what bad Beijing pollution does to people:

** A high concentration of PM2.5 articles in the air on any given day can have immediate negative consequences on the health of infants, the elderly and those with existing respiratory diseases such as asthma. According to Dr Richard Saint Cyr, a general practitioner from the United Family Hospital Group,  “short term pollution spikes could potentially be serious for anyone with serious chronic heart and lung diseases. This includes people with severe asthma; emphysema; or people with heart conditions, especially those at high risk of heart attacks.”

** For the rest of us, the short term effects are merely unpleasant and most of the time completely non-existent: pollution doesn’t smell very nice and you may find yourself having to clear your throat more than usual. Others report having a mildly sore throat.

** Lasting damage from pollution is only seen in those who have resided in Beijing for long periods (i.e. 6 years or more). In other words, the damage to your wellbeing if you are a relatively healthy human being is accumulative – pollution will take many years to cause respiratory problems.

As Saint Cyr sensibly points out, the effects of worrying about the pollution could actually be more harmful to your health than the pollution itself, and breathing in Beijing’s air comes much lower down on the list of things that are bad for your health than, say, eating unhealthily or not getting enough exercise.

** On average, one day of breathing in Beijing’s air is equivalent to smoking 1/6th of a single cigarette. Whether that sounds like a lot to you, or not much at all depends on many factors (if you’re already a smoker for one!). So we’ll leave you to make your own judgment on that…

What should I do if I come to Beijing and it happens to be on one of the really polluted days?

First of all, relax. It may seem unpleasant, but as explained above, unless you have chronic heart or lung disease, it’s not doing you any long-term damage.

If you do fall into the more sensitive category, you can switch some of your activities to indoor ones (where pollution is 30% reduced) and make sure you only do the outdoorsy activities in the early morning as this is when Beijing’s pollution is lowest, before people jump in their cars and the factories start up. Luckily with a Bespoke Beijing tour guide your day is completely flexible so you can decide on the day how you feel.

If you’re really worried, you can also buy a mask locally that will filter the majority of the harmful particles, and these cost around 300RMB to buy from a specialist supplier.

The verdict? If you’re simply visiting Beijing, and do not consider yourself to be in one of the ‘sensitive’ groups, then Beijing’s pollution, even on it’s worst days, is going to have little or no effect on you. Instead of worrying, perhaps just be grateful that you have not lived a lifetime in China’s capital…