Michelin rolled into Shanghai back in September, sprinkling the city’s dining establishments with stars and kicking up controversy in the process. While many heavy hitters such as Ultraviolent and Otto e Mezzo Bombana picked up well-deserved stars, others were awarded to utterly obscure places or mediocre mall-based dim sum spots. Social media buzzed with rage.  What that devil was going on? Had Michelin’s inspectors unearthed culinary treasures that lay hidden from us all these years? Or had the brand lost its touch – or worse? Bespoke sent in a crack team of foodies and journalists to investigate. Yes, yes it’s a tough job but… 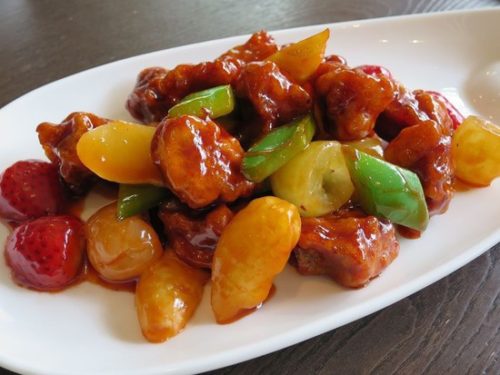 Need to Know: Low key, midrange Cantonese restaurant on the fringes of downtown.
Michelin Says:  “The experienced owner of this popular local restaurant aims to provide quality dim sum and Cantonese cuisine at affordable prices. The cheapest 2 Michelin Star restaurant in the world.”
Bespoke Says: Seriously tasty! Most of the dishes here were winners. We especially loved the crispy changfen stuffed with youtiao and shrimp and the beautifully fresh char siu bao. A tasty take on Sweet and Sour Pork saw the usual pineapple switched out with strawberries and longan. Coming in at around 150RMB per person, Canton 8 offers great bang for your buck, but those 2 Michelin Stars weigh heavily on expectations. While we’ll definitely be back soon, it’s hard to see how a place like this deserves the same number of stars as the epic dining experience at Ultraviolet. Bespoke’s top tip? Go during weekday lunch to avoid the lines. The owner hasn’t answered the restaurant’s phone since the Michelin story broke… 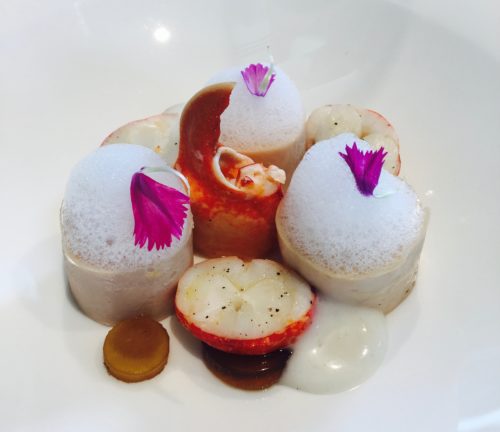 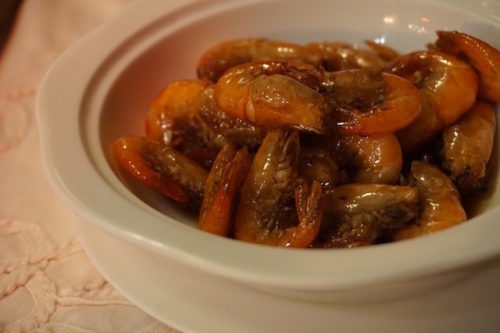 Need  to Know: A charmingly scruffy French Concession mansion (once home to the British Consul) serving classic local dishes.
Michelin Says: “The restaurant offers a Shanghainese menu to satisfy both traditionalists and those who prefer a more modern, lighter style of cuisine”
Bespoke Says: OK, this was a total curveball. We don’t even know where to start. Oh wait, we do – it was the moment shortly after being seated in the dark, cold garden on a chilly November evening when we were presented with a sign warning us that any injuries sustained by the resident stray cats would be our own fault. And it was all downhill from there, people. We’d like to offer a special shout out to the bowl of hot water adorned with a single piece of bok choi that was offered as an alternative to Shark’s Fin Soup (ethically not ok either, Michelin). On paper YongFoo should be a great Shanghai experience, but the reality is a 2 star shocker that left us questioning our own sanity, as well as that of the Michelin team. 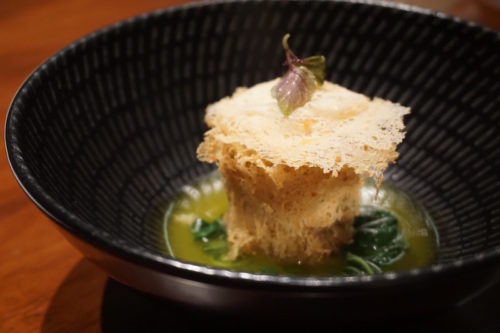 Need to Know:  Upscale,  private-room-only vegetarian restaurant from Shanghai celeb chef Tony Lu.
Michelin Says:  “From the set menu expect masterfully created and artfully presented dishes that use both Chinese and Western cooking methods and techniques.”
Bespoke Says: Phew! We’re back on track with a legit top-end dining experience here. Fu He Hui is almost certainly unlike anywhere you’ve eaten before.  Presentations is beautiful and the flavors delicate, but of the ten courses there were some misses. A delicious ravioli with a soft egg yolk and a dessert of chilled pear and strawberry, served in a flower pot topped with edible ‘dirt’ were standouts., and we’d recommend the mid-range 580RMB per head menu over the cheaper 380RMB offering. Fu He Hui might split opinions – those looking for bold flavors or buzzy vibes should head elsewhere – but it’s a good spot for a gentle and though provoking meal. 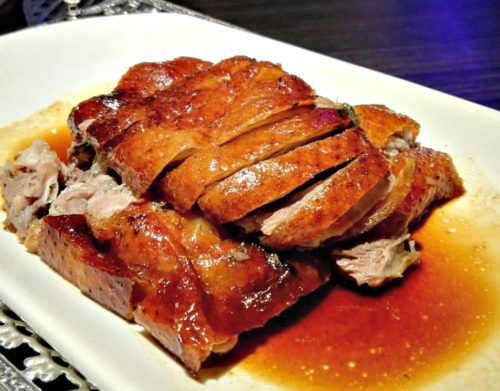 Need to Know: Contemporary Cantonese joint (yes, again) located in a mall.
Michelin Says: “Thought has gone into the decoration but what really makes this place so popular is three specific dishes: their signature and very succulent roast goose with its crisp skin; soy sauce chicken; and char siu.”
Bespoke Says: How did Michelin even find this spot in the distant and, ahem, ‘up-and-coming’ suburb of Xinzhuang? We’d love to know. Make your way past H&M and Pizza Express to the 4th floor of a generic mall where a giant cutout Michelin Man awaits your arrival. With waitstaff clad in French maid uniforms just on the wrong side of sexy and shiny black walls illuminated in purple lighting, we did pause to wonder whether we’d inadvertently stepped into a neighboring love hotel. Still, credit where it’s due, the restaurant’s signature roast goose platter is very much on point, one of the finest we’ve tried and a steal at just 88RMB for a generous portion. Truly delicious. Would we make the long trek out to the ends of subway line 1 just to eat here again? Nope, but should we be in the unfortunate position of having time to kill in Xinzhuang again, this will be top of our list. 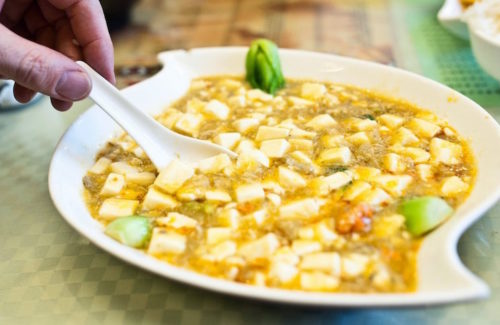 Need to Know:  Reminiscent of a state-run restaurant, LZX serves up all the old school regional favorites with a focus on freshwater shrimp and crabs.
Michelin Says: “Lao Zheng Xing is reputedly the oldest Shanghainese restaurant in the city and was responsible for creating a number of classic dishes.”
Bespoke Says: The premise is a somewhat sneaky one, since the restaurant has clearly changed hands and locations multiple times over the years. In fact, the utilitarian dining room is more reminiscent of an austere 1980s cafeteria than anything from the good old days. Clearly the youngest people in the room by decades, we braced ourselves for the worst as we watched a group of elderly diners berate a waitress over a substandard dish: this was not looking good. Then something changed. A smiling manager welcomed us in English and a charming, enthusiastic hostess shows us to our seats. Before we knew it the table was full of her recommendations: fried river shrimp and fatty dongporou. Now, this is a place that makes no concessions to modernity, so expect basic presentations and the sweet, heavy and often greasy flavours that are part of true Shanghainese food. If that sounds like your thing then this might just be a winner. For bonus points, we’re told the crew here were the only Starred restaurant not to show up to Michelin’s  award ceremony – these guys could teach the so-called Demon Chef a thing or two, we reckon. You ain’t our usual type, Lao Zheng Xing, but we kinda like you anyways.

What a total rollercoaster! Our eating adventures took us to parts of town we’d never visited before and threw up some fab new dim sum spots that we’ll be visiting again. Yet we’re more confused about the Michelin system than ever. Whilst we appreciate their efforts to include spots at the lower end of the price scale, it’s almost impossible to compare places like Canton 8 to, say, Sir Elly’s. The inclusion of so many Cantonese joints represents a bit of a tough break for genuine local restaurants like Jesse of Fu 1039 that have been representing authentic Shanghainese cuisine for years now. As for how YongFoo Elite slipped through the net – thanks to Michelin’s opaque judging process – we’ll most likely never know.  Next time, chaps, how about giving Bespoke a call and letting us take you around?

Reservations at any of these spots (plus equally great Bespoke recommendations) can be included in your private tour of Shanghai. Find out more here. 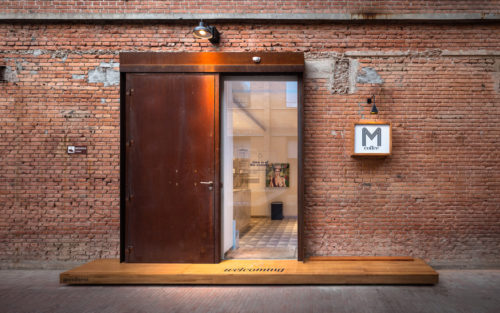